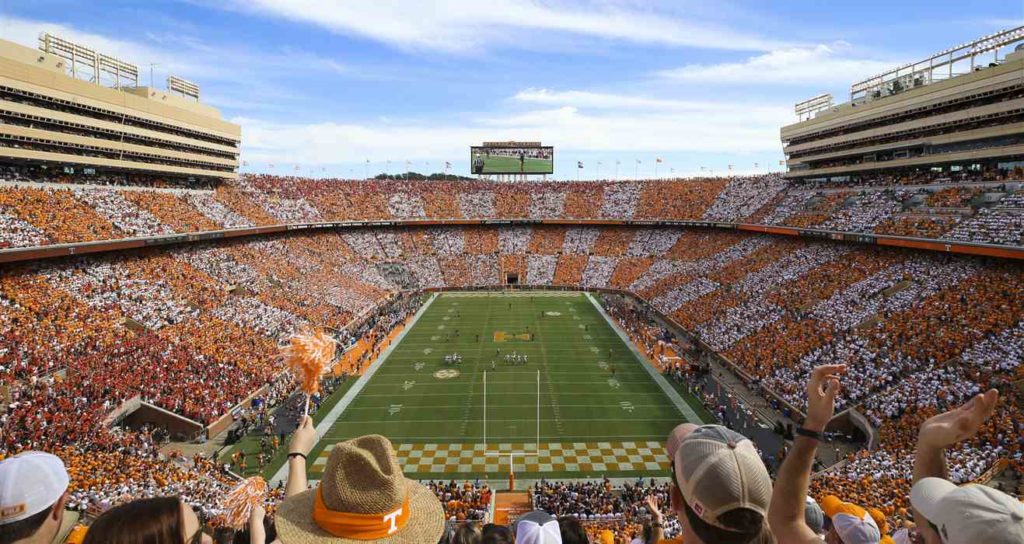 Once you walk into the Neyland Stadium, you will understand why it is one of the most iconic landmarks for college football. The stadium is located on 1235 Phillip Fulmer Way n 1235 Phillip Fulmer Way SW, Knoxville, Tennessee. The stadium hosted its first UT game on September 24, 1921, with the Tennessee Vols defeating Emory & Henry (27–0). Where else, the first night at the stadium was on Sept. 16, 1972 – Tennessee (28) vs. Penn State (21).

Its primary function is to be the home of the Tennessee Volunteers football team. Furthermore, it is used to host large conventions and has been a site for a few NFL exhibition games. From time to time, Neyland Stadium is also used for concerts, political rallies, and religious gatherings. One of the most notable non-sporting events of Neyland Stadium took place in May 1970. The stadium hosted the Billy Graham Crusade which President Richard Nixon was its guest speaker. On top of that, the Jacksons performed three concerts there in August 1984, during their Victory Tour.

From 2004 to 2010, the latest additions and updates to the facility were added at a $136.4 million series of renovations cost. These renovations included the bricking around the field and the removal of the previous hedges, other changes inside and outside of the stadium structure, additions, and reconfigurations of seating areas, as well as a new home locker, press, and varsity rooms.

Most stadiums are named after someone the city or organization honors and the Neyland Stadium is no exception to this rule. This stadium was re-named in 1962 to honor of General Robert Neyland. He went to Tennessee as an ROTC instructor and backfield coach in 1925. In 1926, he was named head football coach in 1926. Neyland served three stints as head football coach at the University of Tennessee between 1926 and 1952. Under his leadership, the Tennessee Volunteers team blossomed in the college football arena, despite two interruptions for military service.

Colonel W.S. Shields, president of Knoxville’s City National Bank and a University of Tennessee trustee is the person who the Shield-Watkins Field (the playing surface at Neyland Stadium) is named after. It was in honor of Col. Shields and his wife, Alice Watkins-Shield. The stadium was first conceived in 1919 when Col. Watkins-Shields provided the initial capital to prepare and equip the athletic field.

For further information on the Neyland Stadium at University of Tennessee, visit the pages listed below.

Ticket Policies:
For information on ticket guarantee and on our preferred ticket marketplace please view the Neyland Stadium tickets page.

Sign up for our newsletter and get $5 off your first order!
You will also recieve a monthly “What’s On Guide” to your email!